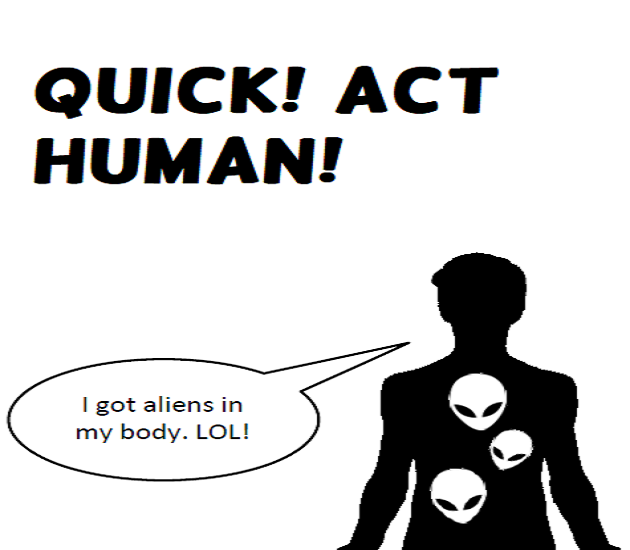 A comedic co-operative one page role playing game for three or more players.

YOU ARE AN ALIEN
You are an alien specializing in Advanced Human Studies. An important secret mission has been assigned to your team by your Grand Alien Superior. Failure is not an option.

Each member of your team is to be teleported inside an individual Human on planet Earth. Once on Earth you will receive your mission orders. It is imperative you blend in with the planet’s inhabitants. Any suspicious activity may mean you encounter nearby hostile humans who wear black suits. They seem to extremely dislike Aliens and will try to capture or kill you.
Your team is given a small teleportation device which can only be used to bring you back to the mother ship once you have fulfilled your mission objectives.

Your entire team is beamed inside the same human host! Your mission objectives have just been received! There are humans looking in your direction! You all internally fight and scrabble to maneuver your human host’s body!

These Guys Played It And Seemed To Like It:
https://dungeonsdeeprpgs.simplecast.com/episodes/the-single-session-show-2-PePKG...

People Who Said Stuff* “First there was the Earth then the rise of mankind and now mankind’s greatest achievement... Quick! Act Human!”

“Of COURSE we test played it... Stop asking that”

"I LITERALLY designed this in powerpoint."