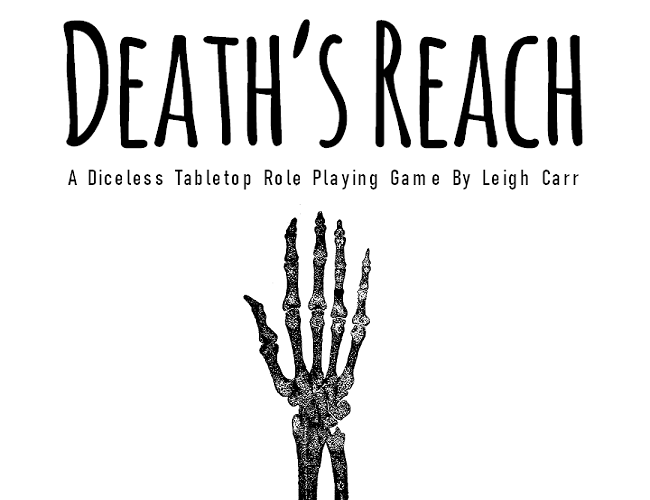 Death’s Reach is a diceless and paperless role playing game for three or more players with quick hands. This easy to play game is ideal for spooky short sessions as well as an evening of fun and horror for you and your fiends… Friends. I meant friends.

Bernard, Janet and Dwayne slowly push open the creaking door to the dilapidated cabin. The interior is covered in a thick layer of dust, its furniture covered in white heavy sheets. Bernard coughs loudly while holding his black thick rimmed glasses to his face.

“Are you sure we’re at the right place?” Janet pulls Dwayne’s arm tightly against her chest.

“Yeah, bae. I’m sure of it. Pete said once we got into the woods to take a left at the fork.”

Dwayne’s sharp eyes catch a glimpse of something in the darkness. He cautiously steps across the rickety wooden floorboards with Bernard and Janet following closesly.

“Footprints in the dust…” Janet whispers, “They go into the kitchen. Pete?”

“Too big. Much too big...” Bernard shakes his head.

Without warning a large knife ploughs through the back of Bernard’s skull. He coughs his last. Thick crimson red shoots from his face and mouth spattering against Janet and Dwayne. As Bernard falls lifeless to the floor the visage of his murderer becomes clear. A tall naked man with a painful and gangrenous grimace opens his fly blown mouth.