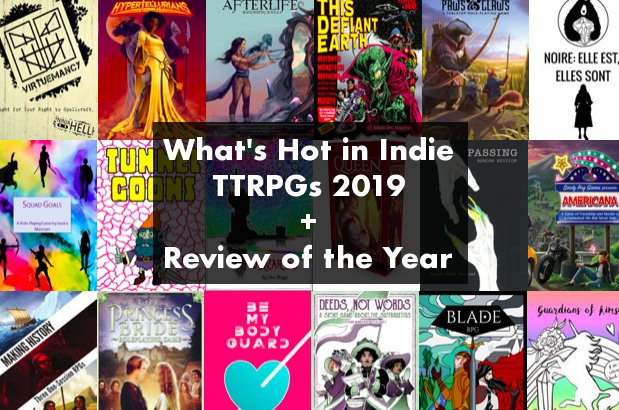 The indie ttrpg scene is wonderfully diverse and vibrant, however it is notoriously difficult for even dedicated indie roleplayers to keep track of everything happening within the hobby. Each year, I bring together a selection of panellists each with their own experiences and perspectives on the hobby and ask each to spotlight a game and a trend or theme from 2019 so as to help me, and everyone, understand more of what's developing within this hobby. This project is an audio recording of the seminar these panellists gave.

In addition, I generate my own written review of the year based on data I collect from therpgpipeline.com and other sources. This project includes my review in the description below and my summarised data as a pdf attachment.

Download the seminar and the summarised data pdf for free here


Epistolary Richard's Review of the Year
(see pdf attachment for data)
Crowdfunding
Over 200 new rpgs were successfully crowdfunded in the first 10 months of the year, with particular peaks in February (due to Kickstarter’s Zinequest initiative), March and September and in every month the number of funded rpgs outnumbered those cancelled or unsuccessful. Particularly highly funded rpgs included:
As in prior years, Kickstarter remains by far the most popular platform though support this year was shaken due to the corporation’s response to employees attempting to unionise. Several rpg projects subsequently adopted statements of support for the employees, however the overall impact has been limited as the employees themselves have not asked creators to withdraw their projects from KS.
The largest rpg-related crowdfunding this year, not included here as it’s not a new game, was for Critical Role’s animated series The Legend of Vox Machina raising more than $11m on a $750k goal.
The Plexodus and other online changes
Google Plus finally closed up public access on April 2 this year. While largely ignored or mocked by the mainstream, G+ developed a large network of indie role-players and designers (aided by the integration with Hangouts and decent tools to curate both your incoming and outgoing feed). Extensive efforts to try to move en masse to another platform failed and rpgers have ended up building new networks on other social media (e.g. Twitter, Facebook, Mastadon, MeWe), on Discord rpg servers or onto Twitch channels. For me personally, Twitter has been the closest replacement to maintain my network and, while it is connecting me with new people I might not have already found, the interactions are poorer and the often hostile culture is driving several designers to close their accounts.
Later in the year, story-games.com also announced their closure in August. The website rose to prominent after the closure of the Forge and helped popularise the name ‘Story Game’ to a strand of indie rpgs, though suffered after some designers shifted to G+. Tod Foley offered his existing site fictioneers.net as both a database of indie rpgs and a forum for design discussion.
itch.io
itch.io is a website for selling primarily indie video games and while they’ve had a category for physical games for years, 2019 has seen the number of indie ttrpgs hosted there surging. My numbers are shaky for the first half of the year, but since July designers have been releasing nearly double the number of new rpgs on itch.io rather than DriveThruRPG (through DriveThru still has far more new products counting new scenarios, settings, stock art, maps, music, model designs etc.) A small amount of the ‘new releases’ on itch.io are designers putting their back catalogues on a new store and dual-listings going both on itch and DriveThru but even discounting those, itch.io has become the preferred sales platform for many new and existing designers.
itch.io Design Jams
I have little idea to what extent the new rpgs on itch.io (or indeed on DriveThru) are getting play, but itch.io is certainly influencing design. Design Jams have been a big deal in indie digital gaming for a while and, as itch.io was set up to support them, ttrpg designers have adopted them as well. Design jams aren’t new to ttrpgs, jams such as Game Chef and the 200 Word RPG competition have been around for years, however having the functionality built into a platform that designers already visited has increased their number considerably. I counted around 40 jams which received ttrpg submissions including 177 entries for Emotional Mecha Jam and 83 for March of the Wizards. The impact of some jams have lingered long beyond their conclusion such as Belonging Outside Belonging. Others help promote a design approach that’s already emerging such as SwordDream with the DreamJam.
itch.io Pricing
A knock-on effect of the popularity of design jams has been on pricing. The majority of games submitted to jams are free. As you often cannot distinguish at a quick glance between these and non-jam games when browsing, it contributes to an expectation that most games (not just jam games) should be free. The games on itch.io with higher prices are often posted on multiple stores and so the designers set higher prices to maintain parity.
itch.io Game families
The lower price point and jam culture also encourages a higher degree of experimentation and use of simpler systems as bases. Rather than PBTA or 5E OGL, games on itch.io are more likely to use Honey Heist, Lasers & Feelings, Along Among the Stars or Goons (which had its own Good design jam this year).
itch.io Functionality
While itch.io does have built-in forums, participation seems relatively low compared to the number of new releases leaving it hard to find the groups from which these games are coming. It’s something I’m interested in working on more next year. The other big question mark for me on itch.io is to what extent are these games actually selling. The site has a best-selling list but not the metal-level bestseller badges of DriveThru.
New Game Families
Last year I asked whether Forged in the Dark will be the new PBTA and I’ve seen 10 new FitD games come through this year including Wicked Ones (also known as Demesne), Arcanademia, Beam Saber, Idiot Teenagers With a Death Wish, Shatterkin, Wicker Man, Errant Deeds, Adrenaline, Brinkwood and Frigid.
Additionally, a number of hacks of For the Queen (called Descended from the Queen) released in 2019 have already come out including Final Lap, Chasing the Ace, Coda  Working for the Corp and The Case that will make the Headlines.
Awards
https://www.igdnonline.com/groundbreakers
Indie Groundbreakers
Game of the Year: Dialect
Best Rules: Good Society
Most Innovative: Verdure
http://www.game-chef.com/2019/10/13/your-game-chef-2019-winner-is/
Game Chef
Winner: Distillation of Time
https://200wordrpg.github.io/winners
200 Word RPG Challenge
Hey, this song reminds me of you
Past Your Bedtime
002: License to Eavesdrop
at December 11, 2019